Power and impotence in Southeast Asia

Posted on September 11, 2017 by roelandvanwely

The term Southeast Asia may sound old, but it is only a recent invention. Until the 20th century, the region was either called East India or India together with South Asia. Following the conquest of Singapore and the Dutch East Indies by the Japanese during World War Two, the Allies created a separate headquarters for the South-East Asia region at Ceylon, the South East Asia Command. The ten countries in the area, Myanmar, Thailand, Laos, Cambodia, Vietnam, Philippines, Malaysia, Brunei, Indonesia, East Timor, subsequently established an Association of Southeast Asian Nations (ASEAN) in 1967. The region is a complex area consisting of a variety of cultures, religions, and it has a rich history. 626 million people call it their home. Michael Vatikiotis discusses in his book the underlying power structures in this part of the world.

Knowledge of these power structures helps to place the events of the region within the correct context. A good example is the current Rohingya refugee crisis in Myanmar. The TV shows us fleeing and prosecuted people, but then sketches only a very simplistic picture of the background of this complicated conflict. Vatikiotis tells in his book the colonial history where relevant, and sometimes even outlines the situation before the colonial era which began with the conquest of Malacca in 1511 by the Portuguese. Burma, as Myanmar used to be called, was an independent kingdom until quite recently. In 1885, however, the British entered Mandalay, the capital of Burma. The country was subsequently not ruled as an independent colony, but added as a province to British India.

For the Burmese it meant that they not only had to accept British rule, but also an Indian as the British entrusted Indians with the administrative and official posts. Vatikiotis points out that colonial rulers used the already existing patronage system, with at the top local kings and princes, who were then considered to be in control of their “own” people. He calls the Dutch East Indies the perfect example of this system and the most successful colonial enterprise in Asia. The Dutch devised a system whereby locally a resident, often the local prince, was said to be in charge. However the resident was always given an assistant resident, a Dutchman, the true ruler, to help him out. Burma though was an exception. There the local prince was sent to Delhi in exile. The stratified society, with a top-down power approach, is said to be characteristic of Southeast Asia.

The Southeast Asian elite rules the land through patronage. Democracy is poorly developed. The opposition relies often on democratic principles and human rights, but when they themselves come to power, they too start to govern by patronage and subsequently leave the principles and human rights for what they are. Aung San Suu Kyi, the Nobel laureate winner, who, according to many, now rules Myanmar, seems to be a prime example of this. In his book Vatikiotis also describes the power of the army in countries like Myanmar, Thailand, Philippines and Indonesia. A power that the army has because of the poor condition of state institutions. Often officials are not paid enough – Singapore seems to be an exception – and as a consequence those officials are vulnerable to corruption, which is almost a lifestyle in Southeast Asia. In the end we have to conclude that the power of Aung San Suu Kyi to influence the current refugee crisis is probably very limited.

Michael Vatikiotis also points in his book to the rise of a fundamentalistic version of Islam – imported from Saudi Arabia – in Southeast Asia. According to Vatikiotis this version of Islam threatens the religious pluralism within the region. The author tells the story of a Buddhist who complains about the fact that his neighbours no longer dress the same, and they feel alienated from them. Especially in Malaysia and Indonesia, where the elite uses Islam to remain in power, non-Islamist are either driven out of the country, imprisoned or killed. The Ankawar Rohingya Salvation Army, the liberation movement of the Rohingya, maintains connections with fundamentalists in Saudi Arabia (the organization also appears to maintain ties with terrorists who have also committed attacks in India). The Buddhist community responds to the violence with violence of their own.

In a country like Myanmar, ravaged by secession movements, but committed to maintaining its sovereignty and Buddhist identity, and allergic to foreign interference, there seems to be little room for the multicultural approach of the West and its emphasis on democracy and human rights. This also applies to Islamic countries like Malaysia and Indonesia and a Buddhist country like Thailand. China, on the other hand, does not seem to attach much importance to democracy and human rights. The first country that Aung San Suu Kyi visited after winning the elections in 2015 was China. China continues to invest in the region, and where the West criticizes and withdraws, China arrives. The future for Southeast Asia therefore seems to be one of fundamentalist religion(s), corruption, and greater Chinese influence, not democracy and human rights. The future that Vatikiotis sketches in his book is not a pleasant one….

Posted on September 9, 2012 by roelandvanwely

On October 15, 1900, the famous German biologist Ernst Haeckel (1834-1919) arrives at Batavia, present Djakarta. Within 15 minutes he is robbed of his passport and wallet. Even then old people were apparently a favorite target of pickpockets … Haeckel was a contemporary and good friend of Charles Darwin (1809-1882). He wrote scientific and popular science books on the theory of evolution. But he was also an accomplished aquarellist and he wrote a popular travel book on the Dutch East Indies. 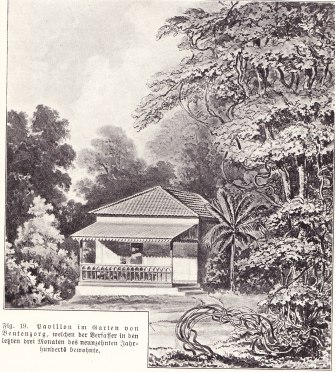 Since the opening of the Suez Canal in 1869, it was easier to travel from Europe to Asia and the number of tourists to Asia increased. Haeckel, now 66, was one of them. On September 5, 1900 he went to Genoa on board the German steamer “Oldenburg”. After short stops in Ceylon and Singapore, he reached the capital of the Dutch East Indies, Batavia, on October 15. The next day, after a train ride of one and a half hours, Buitenzorg. This place had a more pleasant climate than Batavia; Since 1747, the Governor-General had established himself here. Next to the governor’s mansion was the hortus botanicus of Java. It was here that Ernst Haeckel received a warm welcome.

Ernst Haeckel described enthusiastically the origins of Lands Plantentuin, wondering that the garden had been under military supervision for a long time. According to him the Dutch had the same ancestors as the militaristic Germans… Heackel also criticised Leiden University because they supposedly had undermined the independence of the garden for a long time. Haeckel wrote with respect about the reputation of the garden and the scientists working there. He also mentioned that during his stay at Lands Plantent German scientists and officials from German West and East Africa, New Guinea and the Carolines visited the Dutch scientists to ask for their advice.

Haeckel praised the view of Buitenzicht on the volcanoes Salak (2253 meters), Pangerango (3000 meters) and Gedeh (2962 meters) in the south. In the east of the garden was the Tjiliwong River, in the west the Tjidani. The exotic names are suitable for a shining tropical landscape from a different time. Haeckel wrote, photographed, made drawings and watercolors. The result was published in 1901: Aus Insulinde, Malay Reisebriefe. A folio with prints of the watercolors and pictures of his trips to Ceylon and the Dutch East Indies appeared in 1904: Wanderbilder. Those pictures are a pleasure to look at. They show a nice view of a world that no longer exists through the eyes of a bombastic man who is now famous and ridiculed. 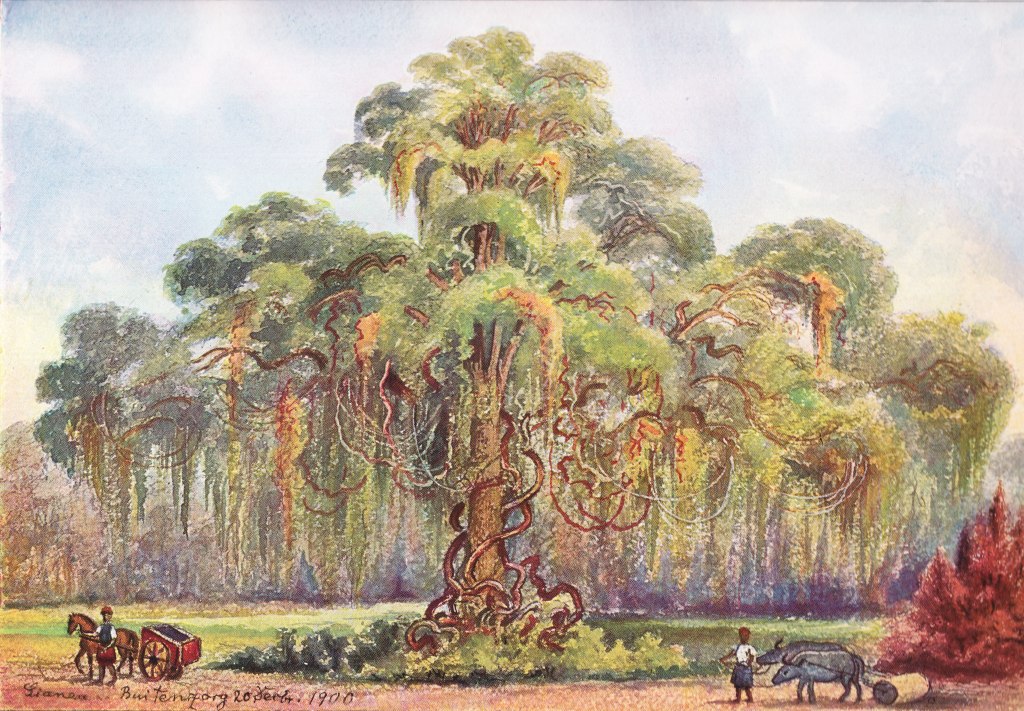